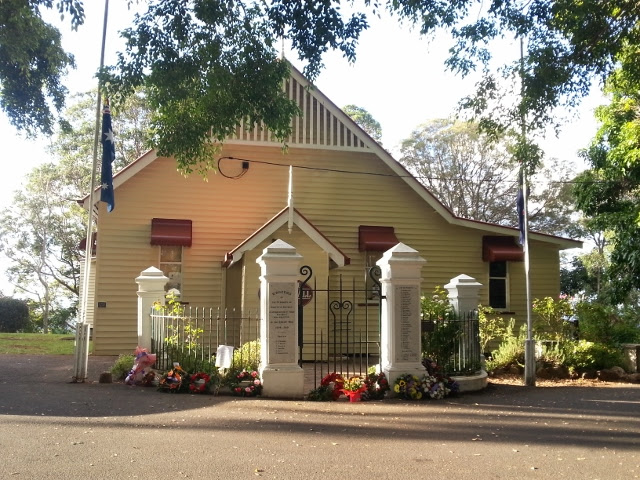 The 11th November 2018 marked 100 years since the signing of the Armistice and the official end of the Great War. For many Australian townships, however, the war did not end until their men came home. For many families that was not until 1919. The Brisbane Courier (Qld. : 1864 – 1933), Tuesday 22 July 1919, page 7 records peace celebrations in Montville. Montvillians certainly had stamina and knew how to celebrate in style with day long entertainment organised between the Montville Hall and the Reserve (what is now known as the Village Green) that continued till midnight.

The peace celebrations were enthusiastically carried out at Montville. A procession of the children of the district and others was formed up at the local post office and marched into the recreation reserve. After a few words had been spoken to the children by the secretary (Mr T. H. Brown), cheers were given for the King and the Allies and the children entered upon a day’s enjoyment. A committee, consisting of Messrs. A. Hoad, J. Aird, J. Sandowne, A. O. Luthers, C. Downes, L. C. Stupart, J. J. Thomas, and T. H. Brown, had charge of all the arrangements. Races were arranged for children of all ages and small prizes given to the winners. A men’s race created much amusement and was won by Mr H. Butt. A horse gallop between several of the local lads resulted in a win for Mr Geo. Skene. Basket lunch was partaken of the committee providing tea in the School of Arts. After tea had been partaken of the hall was cleared and dancing indulged into until 7 30 o’clock, when a very fine and brilliant display of fireworks was conducted for upwards of an hour on the reserve. More dancing and music which was contributed by Mssrs. Walker (Brisbane) and J. W. Marmoat and the rendition of choruses passed away the time till 9 o’clock, when an adjournment was once again made to the reserve for the purpose of lighting the huge bonfire which had previously been prepared by a number of the local young men under the supervision of Mr. L. C. Stupart. A splendid blaze resulted, visible for many miles around. Supper was served by the committee after which dancing was continued till midnight. The music for the evening was supplied by Mesdames Thomas and Stupart and Mr J. Smith. During the afternoon, Mr H. Smith treated the children to several joy rides round the district in his motor lorry, which was greatly enjoyed.

The Montville Post Office where the July 20, 1919 Peace Procession gathered with Henry Smith’s Albion in the foreground used to take the children for rides.” 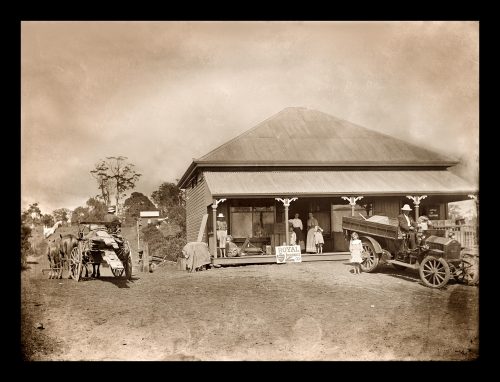 (The Montville Post Office where the July 20, 1919 Peace Procession gathered with Henry Smith’s Albion motor vehicle in the foreground which was used to take the children for rides.)