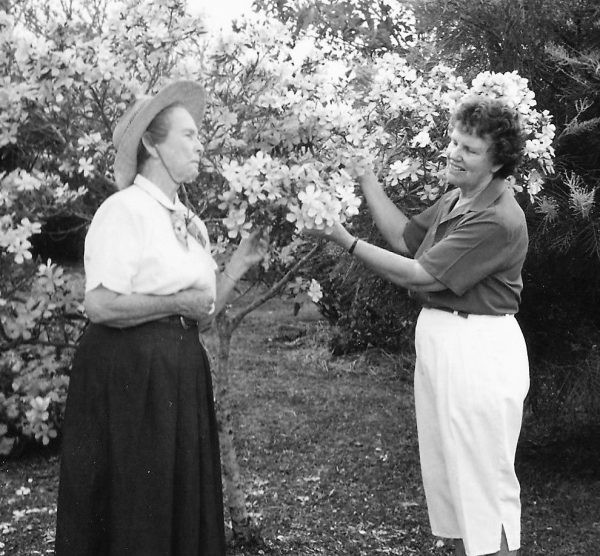 Lucy O’Keefe was appointed as a teacher at the Montville State School in 1938, at the age of 21. In these reminiscences, recorded around 1994, she describes meeting with early Montville pioneers George Edward Brown and his wife Ruth and their family, and how she became lifelong friends with them, until her passing in 1996. Lucy has also recorded here tales of everyday life on the Browns’ farm and in Montville during that era.
The text here is transferred verbatim from her notes, with some minor corrections and explanatory insertions, the latter shown italicised in [square brackets]. 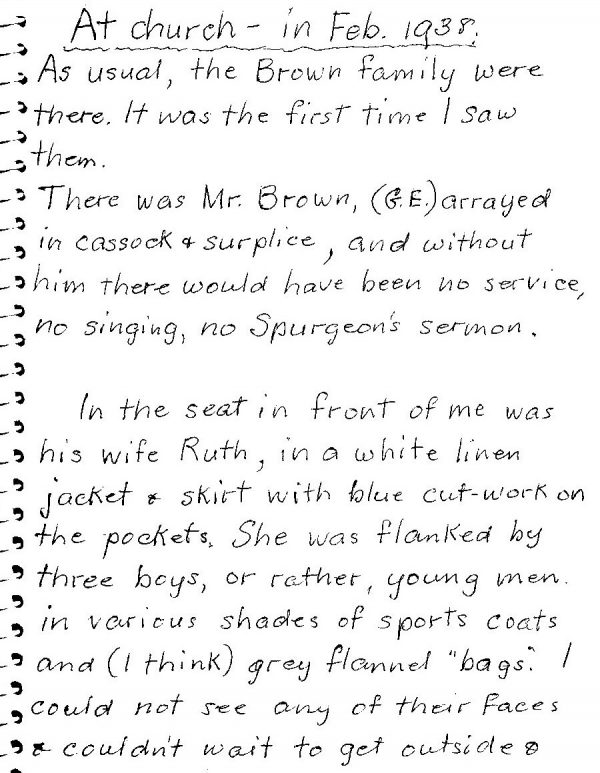 As usual, the Brown family were there. It was the first time I saw them.

There was Mr. Brown, (G.E.) [George Edward] arrayed in cassock and surplice, and without him there would have been no service, no singing, no Spurgeon’s sermon.

In the seat in front of me was his wife Ruth, in white linen jacket and skirt with blue cut-work on the pockets. She was flanked by three boys, or rather, young men in various shades of sports coats and (I think) grey flannel “bags”. I could not see any of their faces and couldn’t wait to get outside and have a look.

At the organ, was the Browns’ only daughter, youngest of the family [Dawne, then aged 13], obviously like her father with rosy face, only hers on that occasion looked a bit more mischievous. She wore a panama hat and of course other things, but I remember only the hat. She was pumping vigorously at the old pedal organ, doing a good job but turning towards the congregation, or perhaps it was to her own family, with a most ferocious grimace if a doubtful note sounded. As a voluntary, her “pièce de résistance” was “In the Cathedral” by Edouard Batiste.

What I didn’t know then was that I was looking at perhaps the best friends I was ever to know, in Dawne and her parents especially.

Neither did I know that those three boys sitting there with their mother were destined to be three heroes, each in his own way – Hilary the youngest joined the army while still underage, (with his father’s permission) and now sleeps in a war cemetery in N. Guinea; Roland (Pat) was to suffer blindness and illness in heroic fashion, and John was of course one of the heroes of Tobruk where he won his M.C. [Military Cross – for gallantry]

Well the service went on, in the fashion of those days, with Venite, Te Deum [‘Morning Prayer’] etc. and two of the hymns we sang were “Jesu [sic] grant me this I pray” and “To Christ the Prince of Peace”. St Mary’s is a modern, lively healthy parish now, innovative and outgoing, but to me days like that Sunday were its cradle.

Interpolation – G.E. had a sweet and trained tenor voice.

Well at last we got outside and I got a look at them. Mr. Brown was rosy, twinkly, chatty, with shortened “a” in words like “forecast”, betraying his English [Yorkshire] origin. It was obvious that he was a cultivated and educated man, which probably accounts for the fact that although his sons were not privileged to receive advanced formal education, you would never have guessed it.

But to return to that Sunday.

All the boys were fair and English looking. Their mother (Ruth) always made me think of Anne of Green Gables, with hair bordering on auburn, kindly green eyes, a powdering of freckles.

Mr. Brown looked quite different out of his surplice. He still wore the suit he was married in, with a vent in the jacket, carried a stout walking stick and wore his felt hat with a jaunty air.

I wondered what sort of home such a nice family went home to, and the next Sunday I found out, because they invited me for midday dinner, and that was my great fortune. So the next bit will be about Craglands [The Browns’ family home in Montville]. 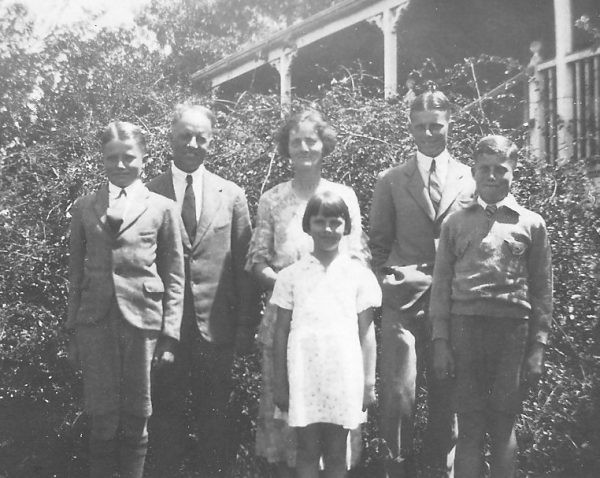 FIRST VISIT TO CRAGLANDS
I think I’m a little mixed up here – the first visit was for afternoon tea on the Saturday after that church service. We had it in the garden under a huge jessamine’s shade. John and Hil [Hilary] were away at tennis or cricket – Pat came from the shed where he had been making [fruit packing] cases. I remember we all laughed so much at something or other that Pat went head over heels, chair and all, into the jessamine bush.

Ruth had made some biscuits, they were oval and had a “wipe” of icing on top, sometimes coloured pink with a little mulberry juice. She told me how she had made some like them when some ladies came to call on her when she was a young bride. Times were hard and they were made not of butter, but of dripping. They were delicious and the ladies said so, Ruth came over all modest and startled everyone by saying “Oh, but they’re only made out of dirty old fat!”
After the first visit I often went home with the family after church. It was a bit of a walk but we all chatted our way merrily along. Mr. Brown seemed to dominate, discussing various subjects. I seem to remember that he would turn his head this way and that, sort of taking in the mountain air and missing nothing. None of us was exactly taciturn.

Now for the house. Often when I stepped over the low sill to enter the living room, I would smell a mixture of violets, or later in the year freesias, and methylated [spirits]! And it was quite intoxicating. The methylated was something to do with Pat’s insulin injections [for his diabetes]. The living room itself was large, and looked rather English to me, with several chairs, including one wing chair, covered in floral print; a piano; a round table which when not in use was covered with a dark green serge (?) cloth; a lovely old sideboard, definitely not one of those heavy canopied monstrosities (we had one!)  Please read the rest of these reminiscences here:  https://montvillehistory.org.au/projects/reminiscences-of-montville-1938-39/