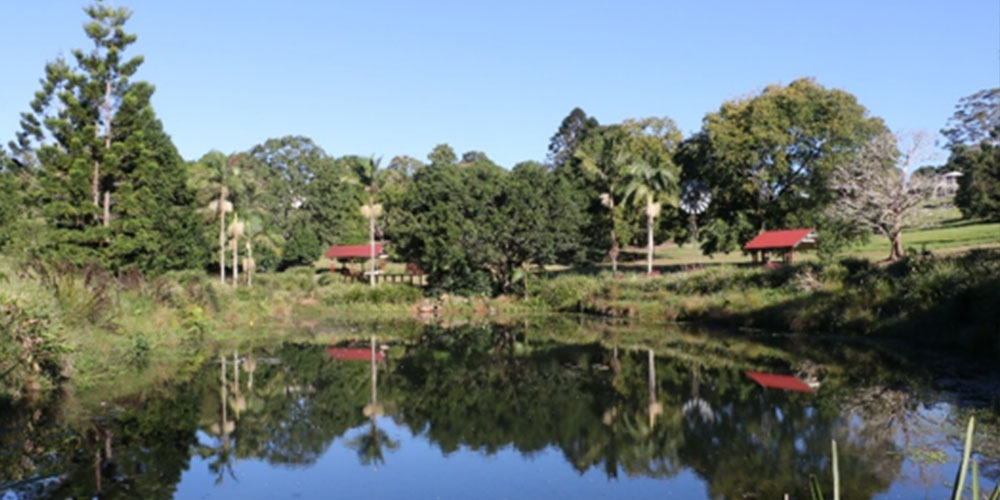 Russell Family Park has an area of 7.3ha.  It contains a spring that lies at the headwaters of Skene Creek, which joins Obi Obi Creek and which flows into the Mary River.  It has rich red volcanic soils that were clothed in lush rainforest – not dissimilar to the rainforest found at Mary Cairncross Reserve in Maleny.

The Park originally was on an important route for indigenous people heading to and from the Baroon Bunya Nut gatherings.

This piece of land was part of Henry Smith’s original selection in October 1893, at what was then known as Razorback, later renamed Montville, as suggested by Henry when he opened a Receiving Office for mail in 1897.  The land was cleared and used to grow oranges and other citrus during the boom years before the late 1920’s and also pineapples and other crops.  The waterhole, which has been known as Smith’s Dam and more simply, the Lagoon, was enlarged in the 1920’s.  It has always been of particular significance – for indigenous people, for timber getters who used it for watering bullocks, as a swimming hole for local children, for irrigation, and now for fire-fighting and flushing public toilets in the village.

The land was bought in 1979 by the Russell Family, its fourth owners, who sold it to Maroochy Shire Council in 1998 to provide an active and passive recreation space for the local and regional community, additional car parking for Montville Village and to enhance the tourist appeal of Montville.  Council developed a Plan that identified a design philosophy for the site and it was discussed with the community.  In June 2001, consultants Gamble McKinnon produced the Park’s Master Plan.

The major initiatives of the Master Plan were: Parking, Play Areas, Path Network, Picnic Facilities, a Kick-a-bout Space, an Amphitheatre and a Rainforest Walk.  The Rainforest Walk was to be established in a proposed rainforest of approximately 1.5ha located at the northern end of the site.  It is to create a green backdrop for the lagoon and to provide visitors with the opportunity to appreciate some of the diversity of local rainforest flora and fauna, including endangered species reintroduced to this part of the park.  The lagoons would provide an opportunity to develop frog-breeding habitat.  Informative signage, including botanical identification labels on plants, will give insights into the relationships between the plants and animals of the rainforest and how they were used by the aboriginal peoples who once inhabited the area.  The whole area is potentially a valuable educational asset for local school groups.

Our work continues and if anyone wants to assist they will find us at the Park between 7.30am and