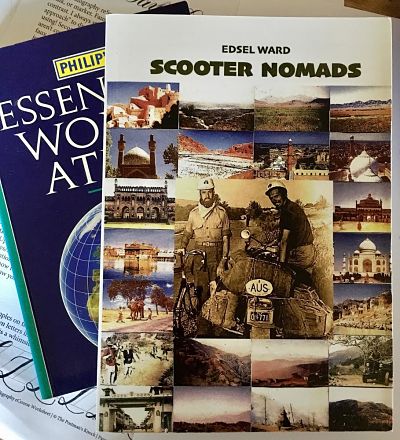 An adventure by two young men and a motor scooter, in two volumes.

Edsel Ward and his wife Lorraine came to Montville after downsizing from their home in Flaxton. Prior to that they had lived in Brisbane where they brought up their family.

As a young man, Edsel and a similarly minded friend from Brisbane Bushwalkers’ Club, Keith Bassett, seized upon the notion of tackling a trek across Asia and Europe, riding pillion on one large motor scooter, that being all they could afford in those times….this was in 1960 and the scooter was a 200cc Japanese ‘Rabbit’ which they aptly christened ‘Mirrabooka’, an Aboriginal name for the Southern Cross.

Edsel was born and raised in the Brisbane suburb of Wynnum. He served his five year apprenticeship in plastering and ended up making moulds for taxidermists at the Queensland Museum and teaching students there to cast moulds. After his apprenticeship, he bought an air ticket, to walk and cave across Tasmania and South Australia. From there, it was north again, to cover most of the Queensland Cape, across the Territory to Darwin, Broome and northern Western Australia, ending in Central Australia, before returning to Brisbane.

Back in Brisbane, Edsel joined the Bushwalkers’ Club and scaled most of the peaks in Southeast Queensland. It was there he met Keith Bassett who was fresh from the Australian Army, having served some time in Korea. At this stage, Keith had very little savings and when the pair discussed the grand adventure, it was agreed to share the odyssey by travelling on a single scooter.

This adventure took them through what was still Ceylon, up the East Indian coast to Nepal, Darjeeling and Kathmandu; across northern India, Benares and Lucknow; Pakistan and the Afghan border; Persia (now Iran), arriving finally at Istanbul in Turkey…this is the extent of the story told in the original ‘Scooter Nomads’.

‘Scooter Nomads: Book Two’ resumes the journey of our intrepid trio (‘Mirrabooka’ included) from the Bosphorus, through Greece; the then-Yugoslavia; Austria, Switzerland, West and East Germany; Denmark, Norway, Sweden; returning through Denmark and West Germany to what was still Holland; Belgium and finally France, where the trio was split by the untimely demise of ‘Mirrabooka’ – who would be reunited with Edsel and Keith for the return trip home. In the interim, the author roamed the United Kingdom from north to south while Keith found employment around London. Eventually, all three returned home by sea, ending an odyssey not to be so readily accomplished in our present world.

On their return, ‘Mirrabooka’ was snapped up by a collector. Keith continued to alternate work with world travel until his death in 2012, and Edsel….well, Edsel married within 12 months of his return, raised three fine children over the course of four different houses and found his niche, doing something different as a representative to timber merchants, eventually in his own business as a timber consultant. The rest is his and the Range’s history.

Edsel’s books, ‘Scooter Nomads’ and ‘Scooter Nomads: Book Two’, can be obtained by contacting the author on 07 5478 5361. Alternatively, copies may be ordered on line by visiting the site http://www.lulu.com and entering Edsel F Ward, or the name of either book. 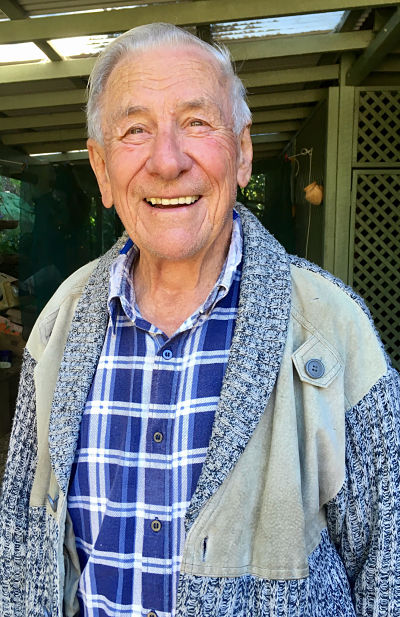