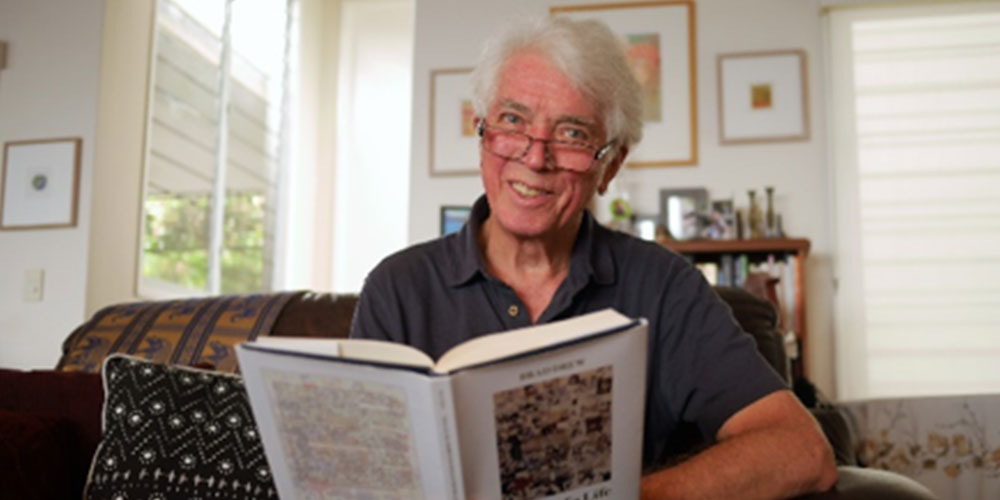 Brad Drew moved from Brisbane to Montville, by way of London, and has led an interesting life, much of which has been anthologised in a book of poetry, accompanied by his artwork, published in 2016. Traces of a Life holds the key to much that has happened in both his life and events across the world. 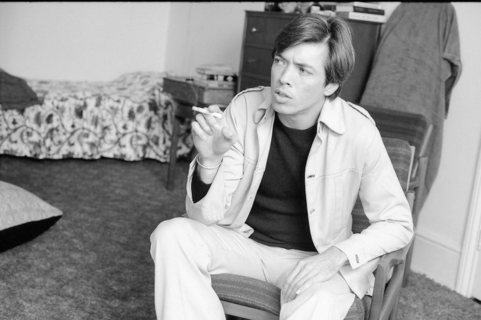 His early years in Brisbane saw him studying architecture at the University of Queensland and there he met various people whose names are well known to us – Ray Meagher (Alf of Home and Away), Barry Otto and Carol Burns. Jack Thompson was someone to hero-worship as a young man.  Brad followed him around the drama group and emulated him, right down to his cigarettes!

When his young marriage terminated, Brad decided it was time to spread his wings and so he did, following the path of a young woman he was rather taken with and ending up in London.  His early poems were written during his time there – when he was a young architect still wondering whether to move into theatre or become an artist. Architecture won out though, primarily because it would put food on the table, but he never lost his love of theatre or art.  His book is full of drawings and various forms of prints and he notes the paper and tools he uses for each one, some of which are unusual: here a sharpened stick, there some liquid paper.

The Day After Haiku
Steady grey daybreak –
Distant spatters on rooftops
Talk of her absence.

His villanelle about the Malaysian Airline plane that was brought down while flying over the Ukraine in 2014 depicts the speed at which other issues take over and we forget too quickly.

Mute Sunflowers from Grey Ashes
…These scattered parts, confetti of their lives
adorn the landscape – silence to appal
as mutely, sunflowers from sad ashes rise….

And then of course there is Brad’s own life and the people and incidents that have contributed to that in a multitude of ways.

For Maurie
…Too often, kindness has an unseen face,
Consideration looks for no decree –
Too late perhaps, we recognise his grace.

As Grief’s For Loss….(about Brad’s mother)
Thus grieved we all, the silent mute; the wall
Pain raised about, as rampart to your fear –
Not for yourself, but for the ones held dear…

Brad is a member of Pente Poets, a collective of Sunshine Coast poets who peer review each other’s work. Brad calls poetry ‘word music’ and feels that good poetry is best read aloud and I think he’s right.  When you read Brad’s poems out loud they feel well formed, the voice of someone you know.  He told me that many of his poems come out almost fully formed and little extra crafting is required. He uses the word ‘craft’ rather than ‘polish’ which takes us back to the screen printing and drawing artist in him and, of course, his career as an architect.

His funny One Season’s Mould is one that everyone will enjoy, considering our very recent wet months.
In the village, townsfolk mutter
Curse, and throng the streets –
Storm the shelves of pharmacy and hardware
Both – for oil of cloves and vinegar
Regroup for bleach in every form….

(Shades of W.H. Auden! Though it is Dylan Thomas to whom Brad feels a close affinity.)

Brad believes his best poetry has come about since he met his partner.  He writes a poem for her for every Christmas, every Valentine’s and of course for every one of her birthdays.  And these follow a theme: Valentine’s poems use the motif of their house on the hill, birthday poems refer to a sea voyage.  There is pleasure in consistency, whether that be writing or love.

This piece does not do justice to the life and writings of Brad Drew about whom a book could be written even without the poetry but if you are interested in reading his anthology you can find copies at Secrets on the Lake near Lake Baroon, Montville and online at: http://www.lulu.com/shop/brad-drew/traces-of-a-life-marks-musings-in-poetry-images-1966-2015/paperback/product-22572110.html and https://www.amazon.com/Traces-Life-MUSINGS-POETRY-IMAGES/dp/0994499221/ref=sr_1_1?ie=UTF8&qid=1524104634&sr=8-1&keywords=Traces+of+a+Life+by+Brad+Drew