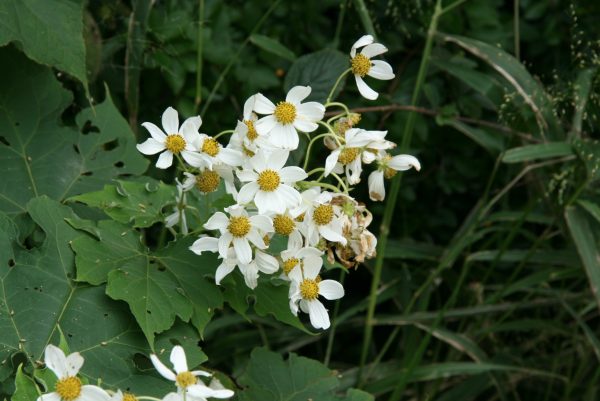 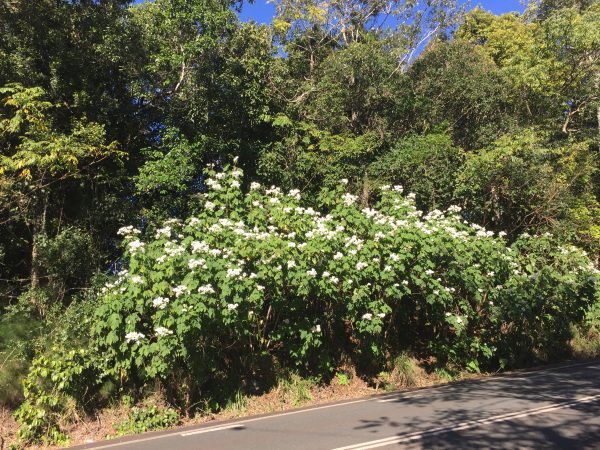 Anzac Flower (Montanoa hibiscifolia) is a native to Mexico and Central America. Other common names include Bush Daisy and Tree Daisy. It was introduced to Far North Queensland as a garden plant, but has escaped cultivation and become a weed of roadsides, riparian areas, gullies and rainforests in the warmer parts of eastern Australia. It is also naturalised in South Africa, eastern Africa and some oceanic islands with warm climates.

This multi-stemmed erect shrubby perennial reaches 2-5 m tall. Its stems are square in cross-section. The leaves are opposite, large, hairy, to 45 cm long & 30 cm wide and deeply lobed. The profuse daisy-like flowers, about 40 mm across, have white ray petals and yellow discs and have an unpleasant odour. They form large terminal branched clusters. The distinctive flowers appear in late April through into June, producing reddish-brown seeds contained in the old papery flowers. Moving vehicles and water may move the seeds from place to place.

Anzac Flower can form dense thickets which out-compete native plants. Its tall and sprawling growth habit can create sight-line problems when growing along a roadside. It is regarded as an environmental weed in Queensland, but is not a prohibited or restricted invasive plant under the Queensland Biosecurity Act 2014. However, by law, everyone has a general biosecurity obligation to take reasonable and practical steps to minimize the risks associated with invasive plants and animals under their control.